People can use pointing devices like a trackpad or mouse to supplement touchscreen and keyboard input, letting them use clicks and fluid, intuitive gestures to initiate actions. 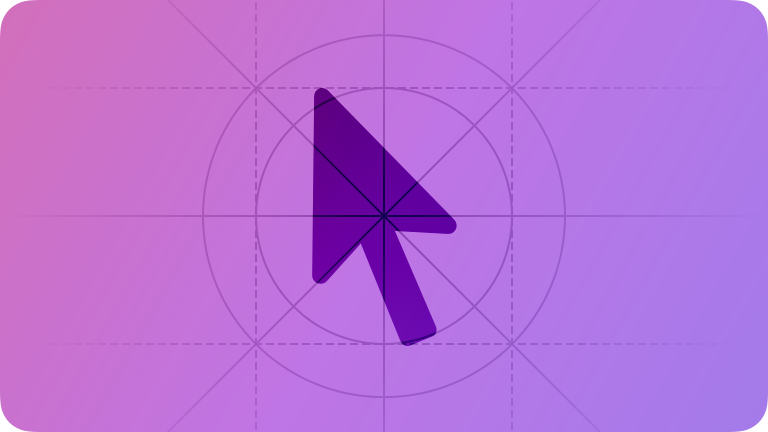 People appreciate the precision and flexibility that pointing devices offer. iPadOS builds on the traditional pointer experience, automatically adapting the pointer to the current context and providing rich visual feedback at a level of precision that enhances productivity and simplifies common tasks on a touchscreen device. The iPadOS pointing system gives people an additional way to interact with apps and content — it doesn’t replace touch.

Be consistent when responding to mouse and trackpad gestures. People expect most gestures to work the same throughout the system, regardless of the app or game they’re using. On a Mac, for example, people rely on the “Swipe between pages” gesture to behave the same way whether they’re browsing individual document pages, webpages, or images.

Avoid redefining systemwide trackpad gestures. Even in a game that uses app-specific gestures in a custom way, people expect systemwide gestures to be available for actions like revealing the Dock or Mission Control. Remember that Mac users can customize the gestures for performing systemwide actions.

Provide a consistent experience in your iPadOS app, whether people are using touchscreen gestures, a pointing device, or a keyboard. On their iPad, people tend to move fluidly between using touch and a connected input device, and they don’t want to learn different interactions for each mode or for each app they use.

Enable a consistent experience when people press and hold a modifier key while interacting with objects in your app. For example, if people can duplicate an object by pressing and holding the Option key while they drag that object, ensure the result is the same whether they drag using touch or the pointer.

No additional considerations for iOS. Not supported in tvOS or watchOS.

Enable multiple selection in custom views when necessary. In iPadOS 15 and later, people can click and drag the pointer over multiple items to select them. As people use the pointer in this way, it expands into a visible rectangle that selects the items it encompasses. Standard nonlist collection views support this interaction by default; if you want to support multiple selection in custom views, you need to implement it yourself. For developer guidance, see UIBandSelectionInteraction.

Distinguish between pointer and finger input only if it provides value. For example, a scrubber can give people an additional way to target a location in a video when they’re using the pointer. In this scenario, people can drag the playhead using either the pointer or touch, but they can use the pointer to click a precise seek destination.

iPadOS integrates the appearance and behavior of both the pointer and the element it moves over, bringing focus to the item the pointer is targeting. You can support the system-provided pointer effects or modify them to suit your experience.

The highlight effect transforms the pointer into a translucent, rounded rectangle that acts as a background for a control and includes a gentle parallax. The subtle highlighting and movement bring focus to the control without distracting people from their task. By default, iPadOS applies the highlight effect to bar buttons, tab bars, segmented controls, and edit menus.

The lift effect combines a subtle parallax with the appearance of elevation to make an element seem like it’s floating above the screen. As the pointer fades out beneath the element, iPadOS creates the illusion of lift by scaling the element up while adding a shadow below it and a soft specular highlight on top of it. By default, iPadOS applies the lift effect to app icons and to buttons in Control Center.

Hover is a generic effect that lets you apply custom scale, tint, or shadow values to an element as the pointer moves over it. The hover effect combines your custom values to bring focus to an item, but it doesn’t transform the default pointer shape.

Pointer accessories are visual indicators that help people understand how they can use the pointer to interact with the current UI element. For example, a pointer approaching a resizable element might display small arrows to indicate that the element allows resizing along a certain axis.

Unlike pointer shapes and content effects, accessories are secondary items that can combine with any pointer to communicate additional information. For developer guidance, see UIPointerAccessory.

Use clear, simple images to create custom accessories. A pointer accessory is small, so it’s essential to create an image that communicates the pointer interaction without using too many details.

Consider using the accessory transition to signal a change in an element’s state or behavior. In addition to animating the appearance and disappearance of pointer accessories, the system also animates the transitions among accessory shapes and positions that can accompany content effects. For example, you could communicate that an add action has become unavailable by transitioning the pointer accessory from the plus symbol to the circle.slash symbol.

By default, iPadOS applies magnetism to elements that use the lift effect (like app icons) and the highlight effect (like bar buttons), but not to elements that use hover. Because a hover-enabled element doesn’t transform the default pointer shape, adding magnetism could be jarring and might make people feel that they’ve lost control of the pointer.

The system also applies magnetism to text-entry areas, where it can help people avoid skipping to another line if they make unintended vertical movements while they’re selecting text.

When possible, enable the system-provided content effects. People quickly become accustomed to the content effects they see throughout the system and generally expect their experience to apply to every app they use. To provide a consistent user experience, align your interactions with the design intent of each effect. Specifically:

Prefer the system-provided pointer appearances for standard buttons and text-entry areas. You can help people feel more comfortable with your app when the pointer behaves in ways they expect.

Create contiguous hit regions for custom bar buttons. If there’s space between the hit regions of adjacent buttons in a bar, people may experience a distracting motion when the pointer reverts briefly to its default shape as it moves between buttons.

Specify the corner radius of a nonstandard element that receives the lift effect. With the system-provided lift effect, the pointer transforms to match the element’s shape as it fades out. By default, the pointer uses the system-defined corner radius to transform into a rounded rectangle. If your element is a different shape — if it’s a circle, for example — you need to provide the radius so the pointer can animate seamlessly into the shape of the element. For developer guidance, see UIPointerShape.roundedRect(_:radius:).

Prefer system-provided pointer effects for custom elements that behave like standard elements. When a custom element behaves like a standard one, people generally expect to interact with it using familiar pointer interactions. For example, if buttons in a custom navigation bar don’t use the standard highlight effect, people might think they’re broken.

Use pointer effects in consistent ways throughout your app. For example, if your app helps people draw, enable a similar pointer experience for every drawing area in your app so that people can apply the knowledge they gain in one area to the others.

Avoid creating gratuitous pointer and content effects. People notice when the appearance of the pointer or the UI element beneath it changes, and they expect the changes to be useful. Creating a purely decorative pointer effect can distract and even irritate people without providing any practical value.

Keep custom pointer shapes simple. Ideally, the pointer’s shape signals the action people can take in the current context without drawing too much attention to itself. If people don’t instantly understand your custom pointer shape, they’re likely to waste time trying to discover what the shape means.

Consider enhancing the pointer experience by displaying custom annotations that provide useful information. For example, you could display X and Y values when people hold the pointer over a graphing area in your app. Keynote uses annotations to display the current width and height of a resizable image. 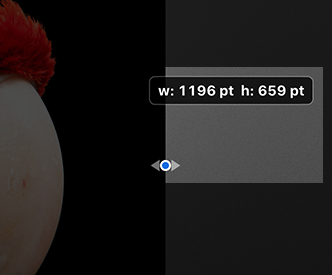 Avoid displaying instructional text with a pointer. A pointer that displays instructional text can make an app seem complicated and difficult to use. Instead of providing instructions, prioritize clarity and simplicity in your interface, so that people can quickly grasp how to use your app whether they’re using the pointer or touching the screen.

Consider the interplay of shadow, scale, and element spacing when defining custom hover effects. In general, reserve scaling for elements that can increase in size without crowding nearby elements. For example, scaling doesn’t work well for a table row because a row can’t expand without overlapping adjacent rows. For an element that has little space around it, consider using a hover effect that includes tint, but not scale and shadow. Note that it doesn’t work well to use shadow without including scale, because an unscaled element doesn’t appear to get closer to the viewer even when its shadow implies that it’s elevated above the screen.

macOS supports a wide range of standard mouse and trackpad interactions that people can customize. For example, when a click or gesture isn’t a primary way to interact with content, people can often turn it on or off based on their current workflow. People can also choose specific regions of a mouse or trackpad to invoke secondary clicks, and select specific finger combinations and movements for certain gestures.

macOS offers a variety of standard pointer styles, which your app can use to communicate the interactive state of an interface element or the result of a drag operation.